I was the lead designer on a consultant team tasked to investigate the US Navy’s physiological episode problem affecting its F/A-18 fighter jets.
CONTRIBUTIONS
Design Research
System Design
UI/UX Design
THE CHALLENGE
F/A-18 fighter pilots were mysteriously losing oxygen in the cockpit while flying at high altitudes or extreme speeds. No mechanical cause had been identified.
THE SOLUTION
A comprehensive digital maintenance platform designed to foster more effective collaboration between engineers, maintainers, and pilots.
I was the sole designer on a 4-person team; I worked closely with a data scientist on the research and analysis that created the foundation for our solution.
Design Research 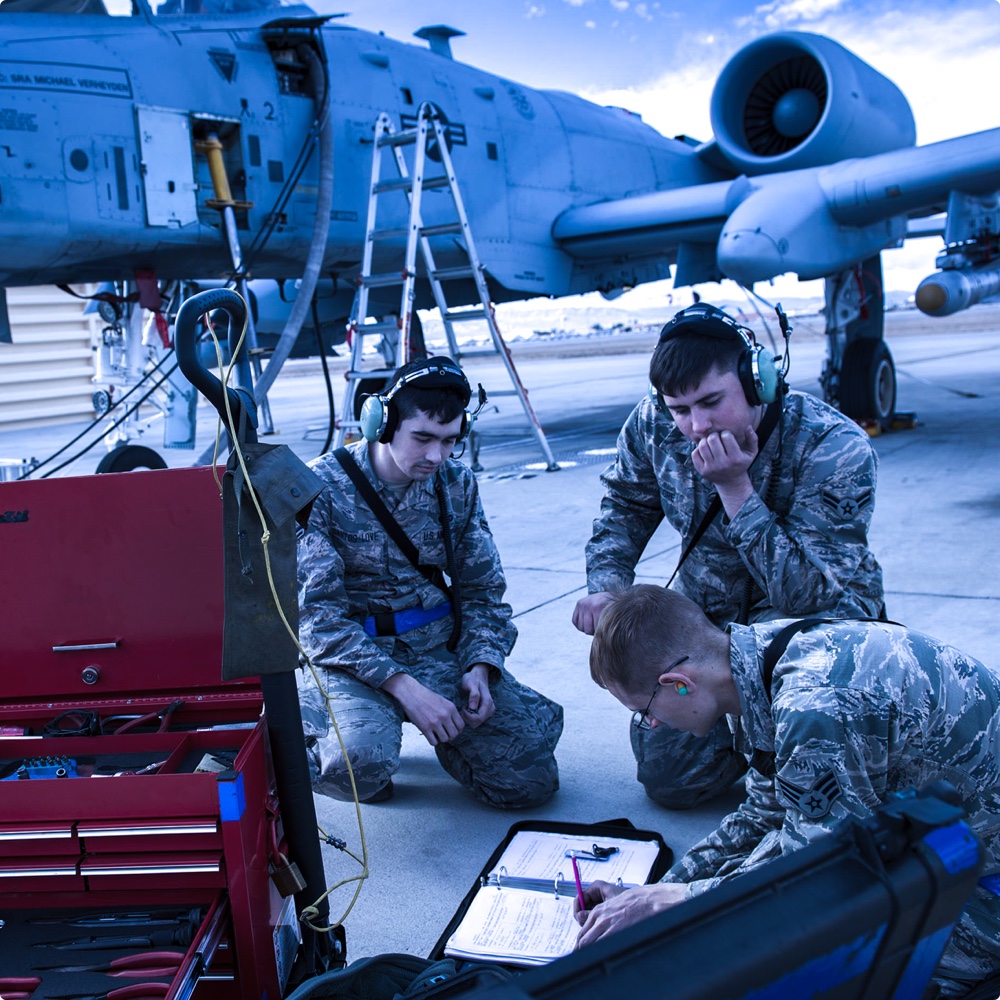 An unresolved national crisis
A lot of investigation had been done on the F/A-18's physiological episode problem by NASA, numerous consultancies, and the Navy itself.

Disparate mechanical issues had been diagnosed on a plane-by-plane basis, but nothing conclusive had been established and stakeholders were desperate to resolve the issue systemically.
Examining the machine
Every engineer or pilot we spoke to had a theory: faulty pressurization gauges, contaminated oxygen systems, consistent user errors, etc.

But after months of assessments, calculations, and visits to naval bases—nothing stood out mechanically. 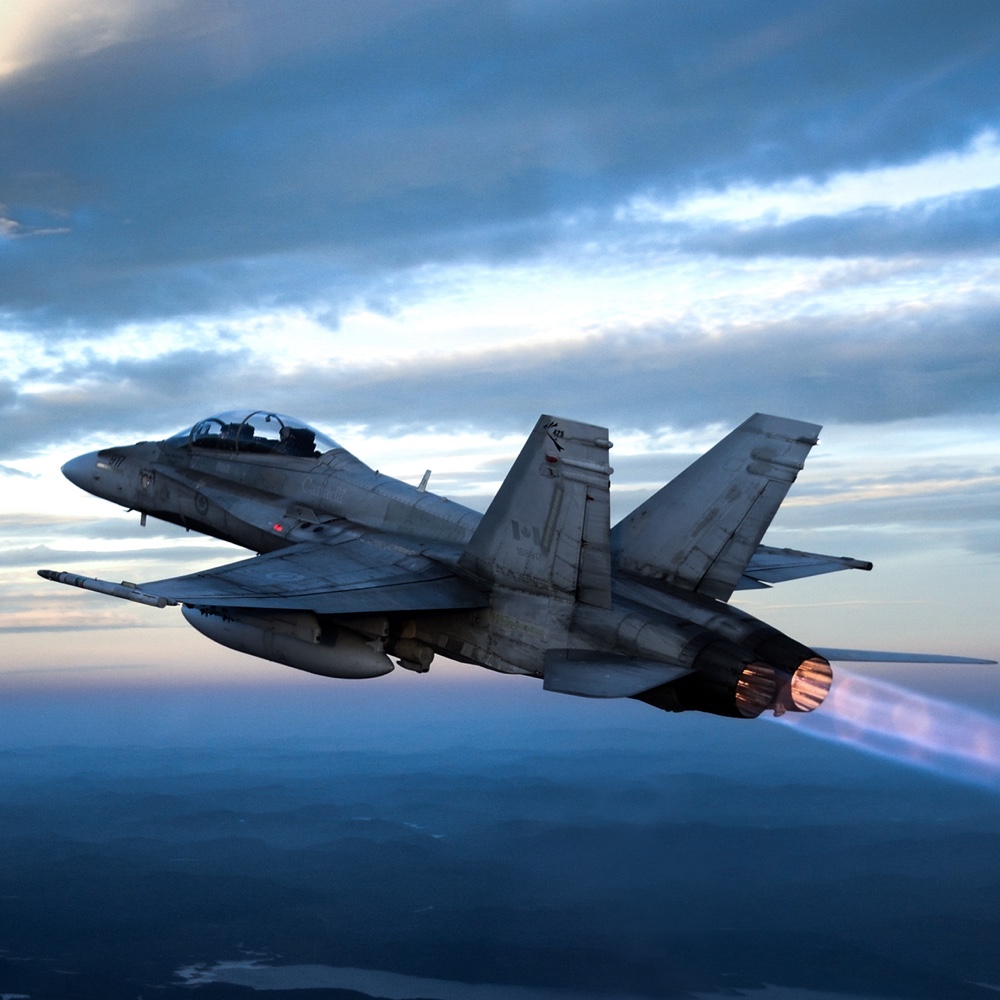 The problem with flying terrifically complicated fighter jets built in the '80s thousands of feet in the air at hundreds of miles an hour...is that a lot can go wrong. 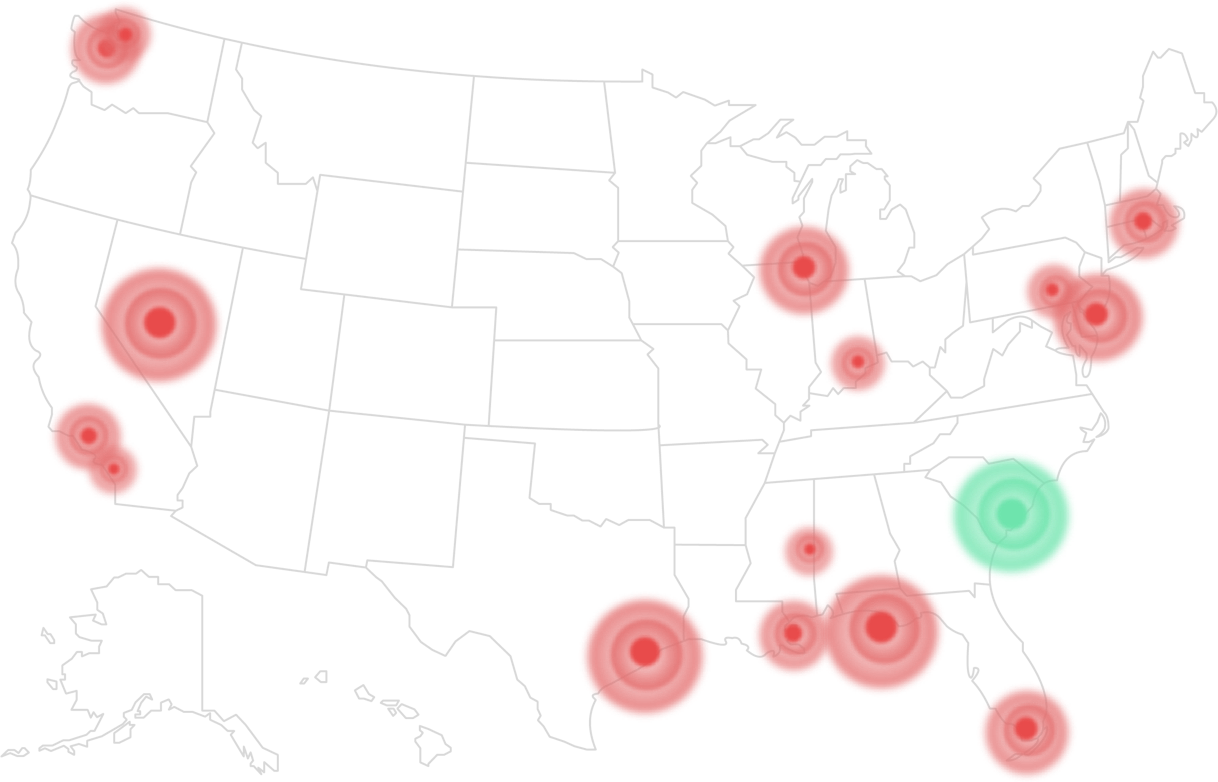 Reevaluating the data
We went back to the drawing board to reevaluate the challenge from a non-mechanical standpoint.

When we processed the data by time range and location, we identified a base that had flipped from one of the highest national PE rates to near zero over the prior 2 years.
(Base name, location, etc. omitted for confidentiality)
OBSERVATION
We did some digging to figure out why this particular base had experienced such a dramatic decline in aircraft incidents, and discovered that a new chief maintainer (AMEC) had taken over the base.

A teammate and I spent hours on the phone with this AMEC and his counterparts at other bases, and observed that the managerial environment he created was markedly more open and collaborative than elsewhere.
Regardless of rank or division, everyone worked together.
INSIGHT
Because physiological episodes may stem from a spectrum of mechanical issues, cross-functional collaboration leads to improved aircraft safety.
System Design
A human-centered approach to a mechanical issue.
Fragmented communication among stakeholders—pilots, maintainers and engineers—had led to under-reporting, a lack of available support, and unexplainable aircraft malfunctions. 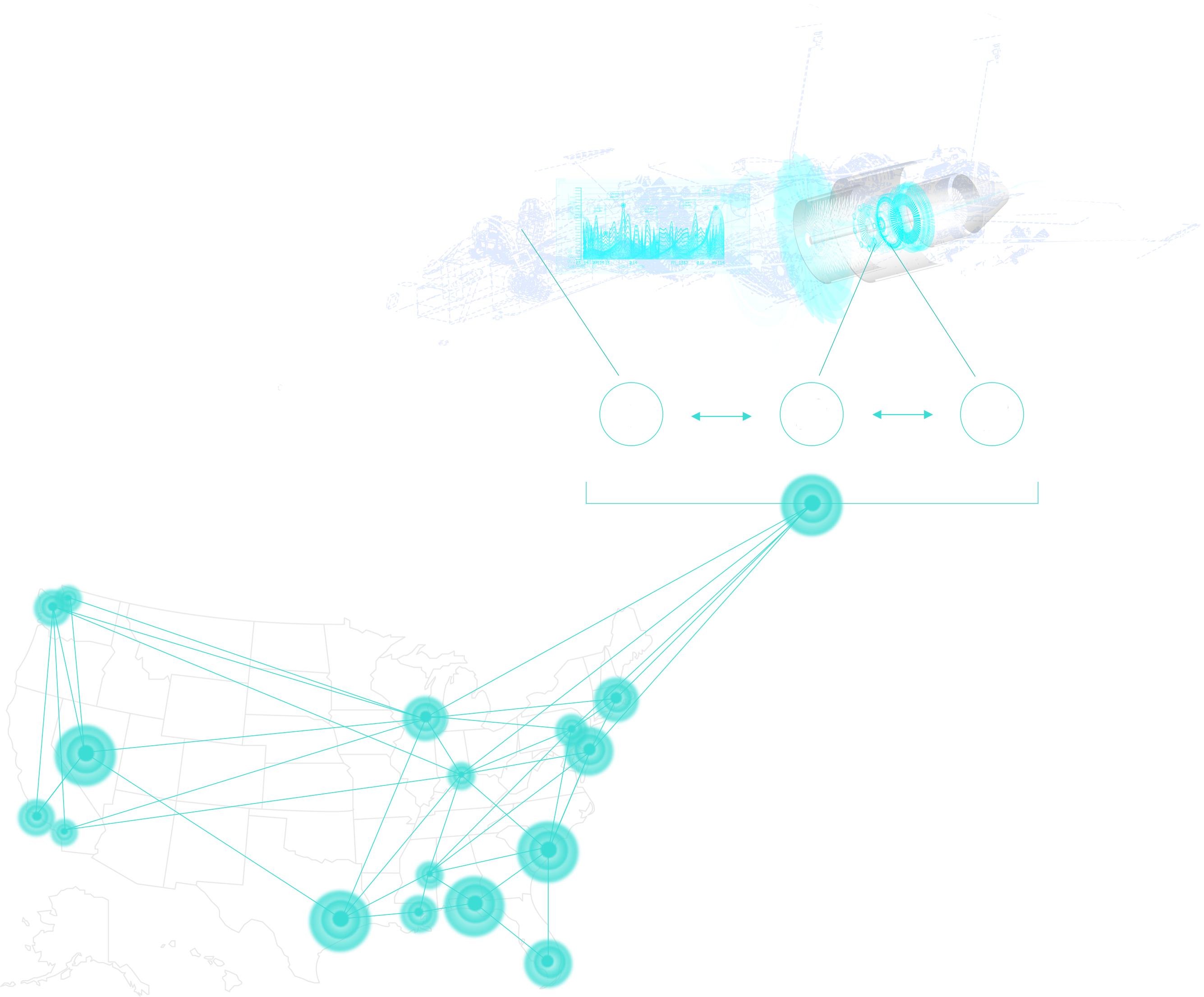 Airwire creates dynamic collaboration between stakeholders within a base, and a national network of shared intelligence among bases to detect, diagnose, and fix aircraft malfunctions. 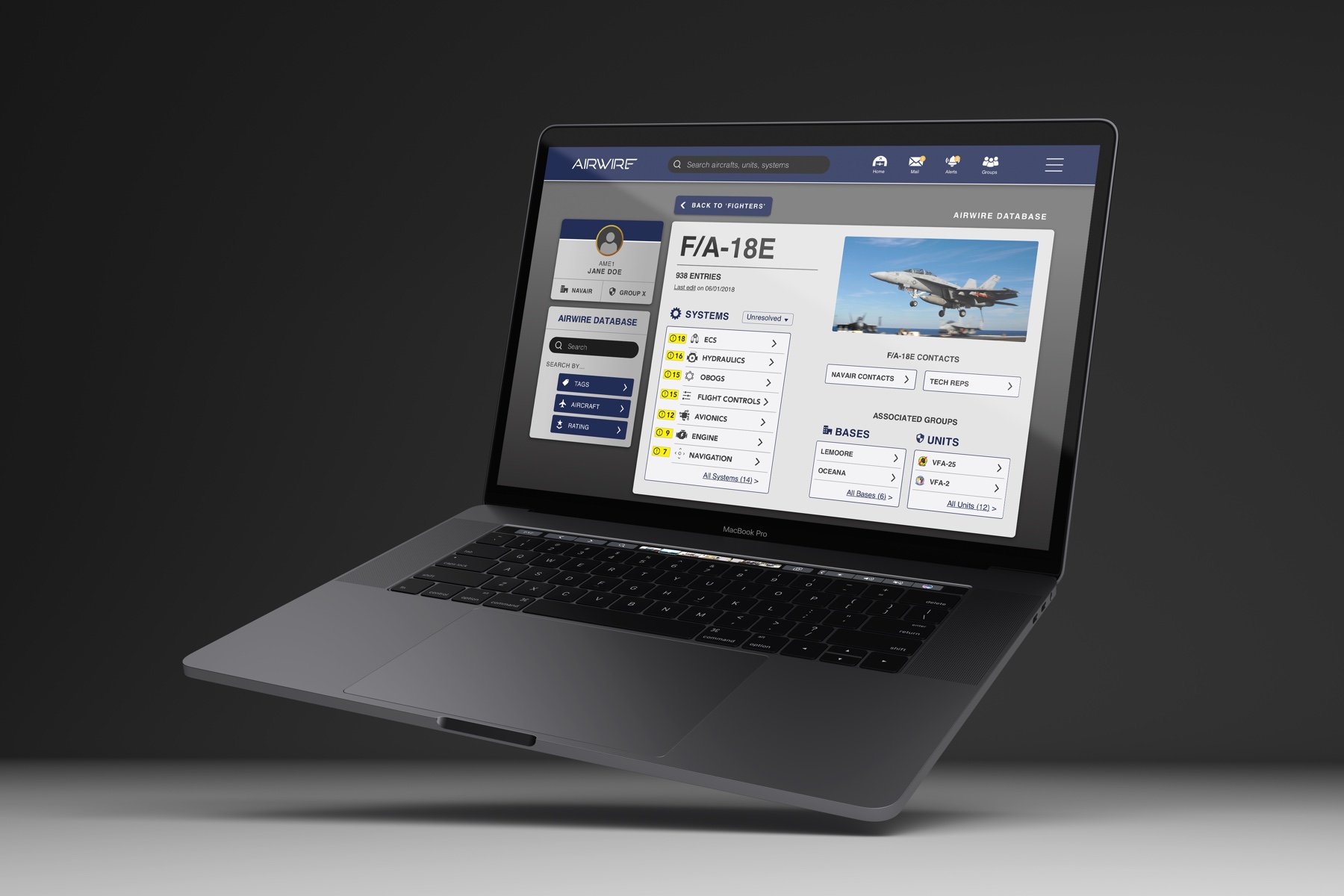 Aesthetic Identity
This project pushed me out of my comfort zone as a designer for a multitude of reasons, one of which was crafting a product look and feel for a user base who was used to straight HTML interfaces at work.

Despite my love for digital beauty, Instagram-chique was not going to fly [pun] for this project, so I worked with engineers and chief maintainers at our main base to devise an aesthetic that was modern, tough, and acceptable as a direct transition  from clunky HTML forms. 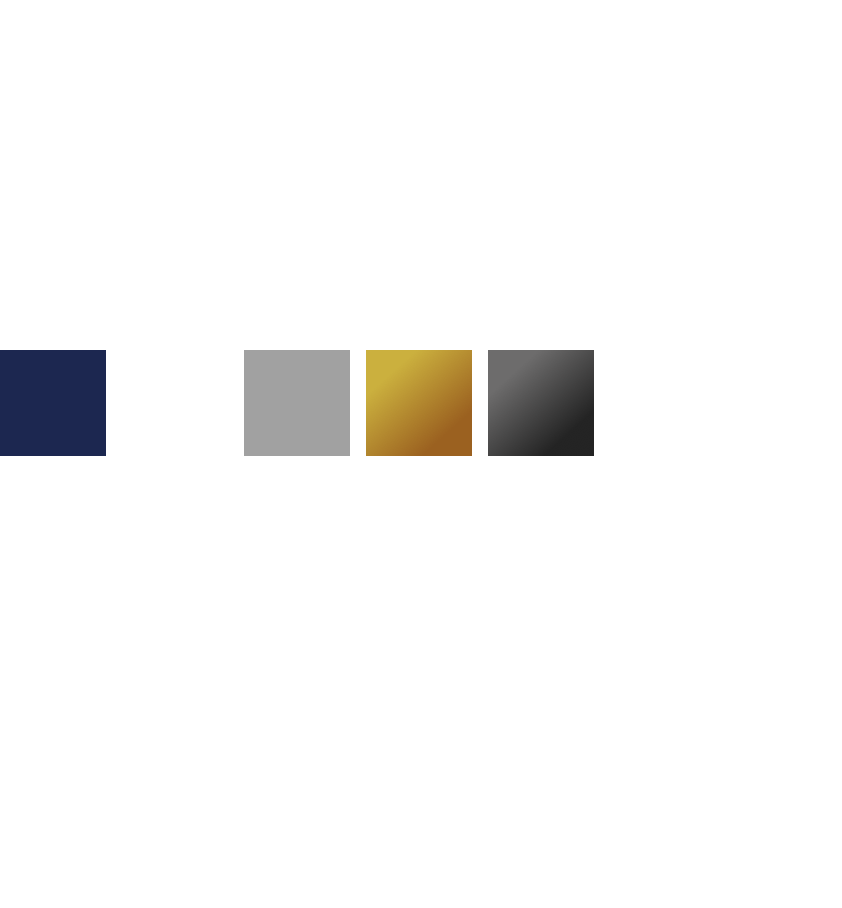 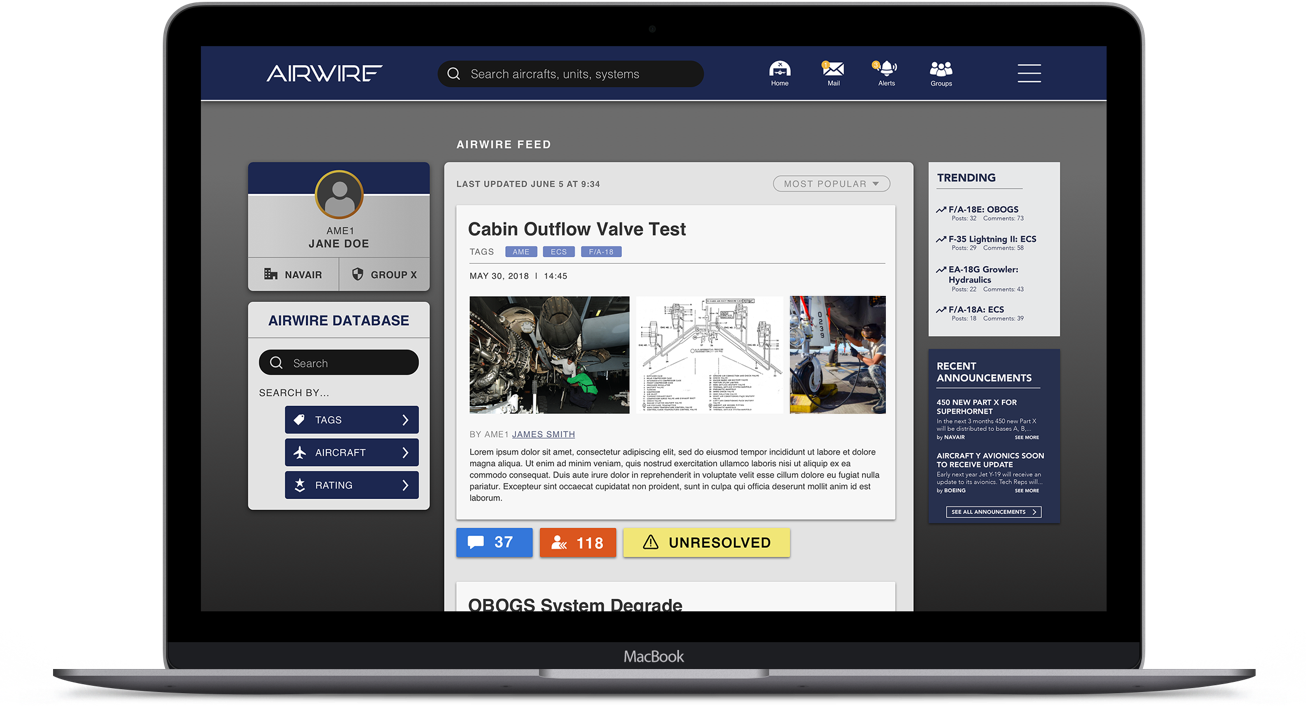 Airwire Feed
The home page for Airwire incorporates a "feed" where users can engage with open submissions from their base, division, etc.

Through my user research, I discovered that maintainers were currently collaborating on issues through Facebook groups - so this was a reasonably straightforward feature adaptation. 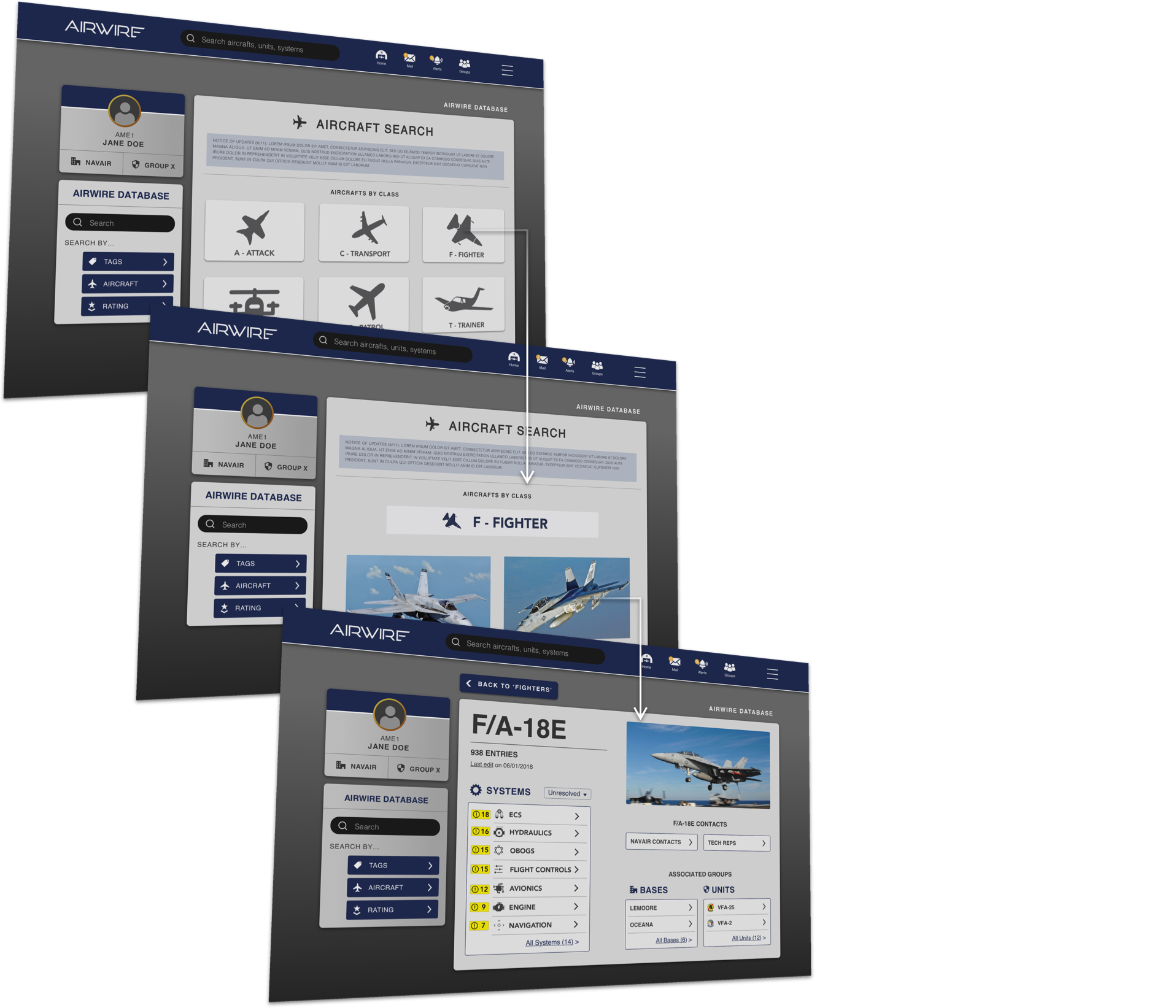 The goal: data & insights
Through our project journey, we determined that if NASA couldn't diagnose an overarching mechanical issue over multiple years of expert investigation, we were going to have a tough time doing it in 3 months.

What we could do, however, was create a mechanism that might eventually lead to a silver-bullet diagnosis with enough time and use.

So Airwire entries feed to a machine-learning-integrated back end that analyzes trends to derive insights. 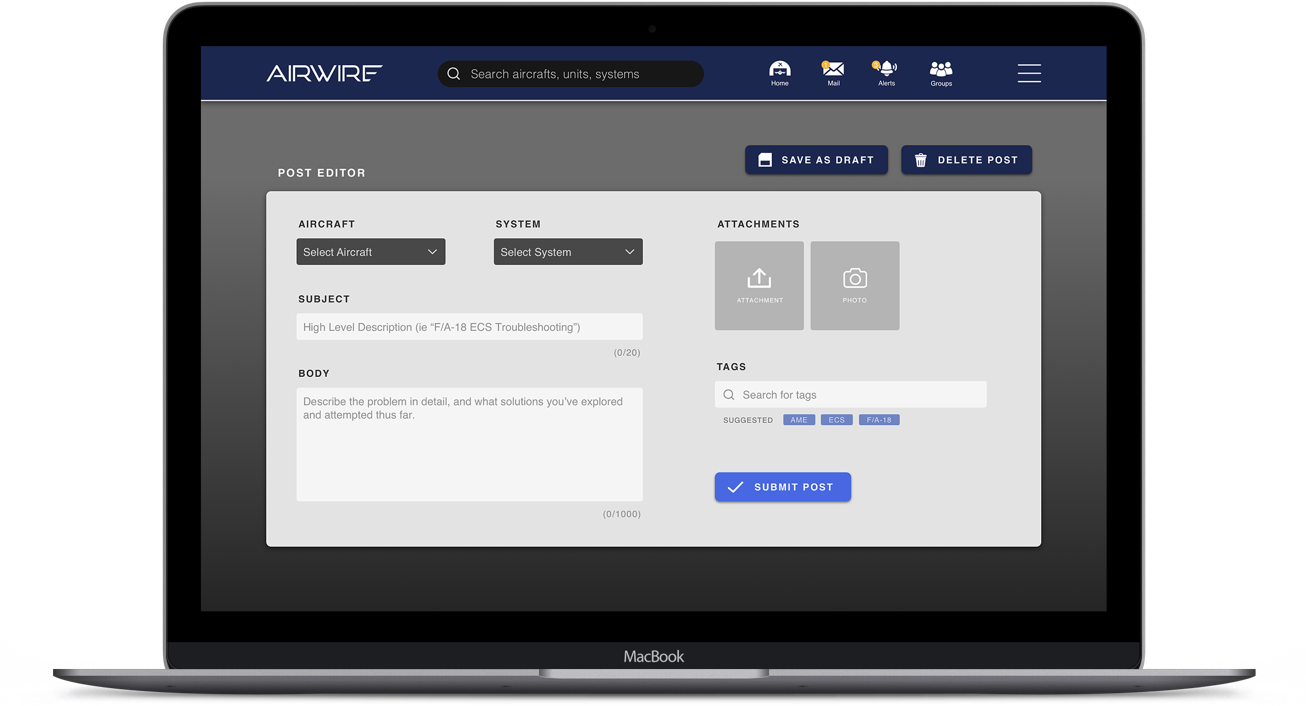 The main priority with the post editor was brevity: sailors were used to submitting arduous paper tickets to engineering, which often wouldn't receive a response for months.

So I designed a 1-step submission process that would be sent to the platform for immediate peer feedback.
A new way to progress rank
Our primary thought partners were maintainer chiefs and lieutenant commanders, who both noted the frequent opacity of selecting sailors for promotion.

So Airwire profiles include a score system to motivate engagement among users and serve as a basis for ranking up. 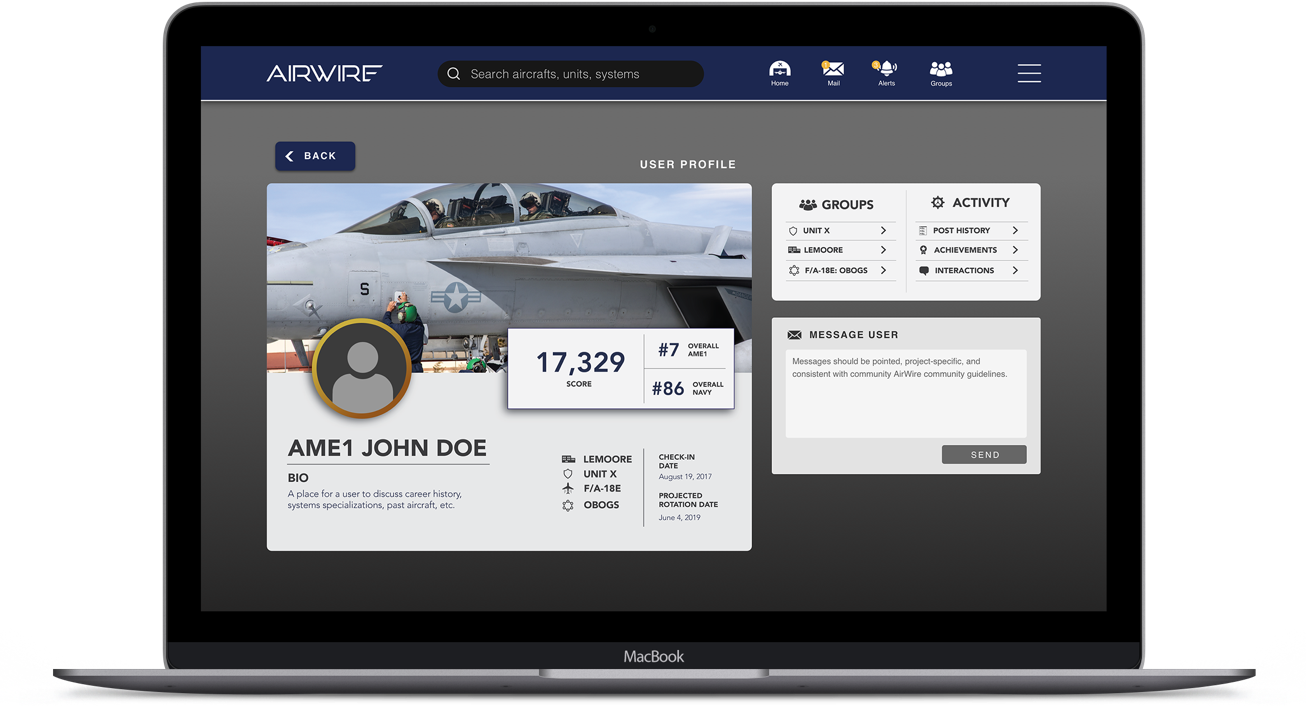 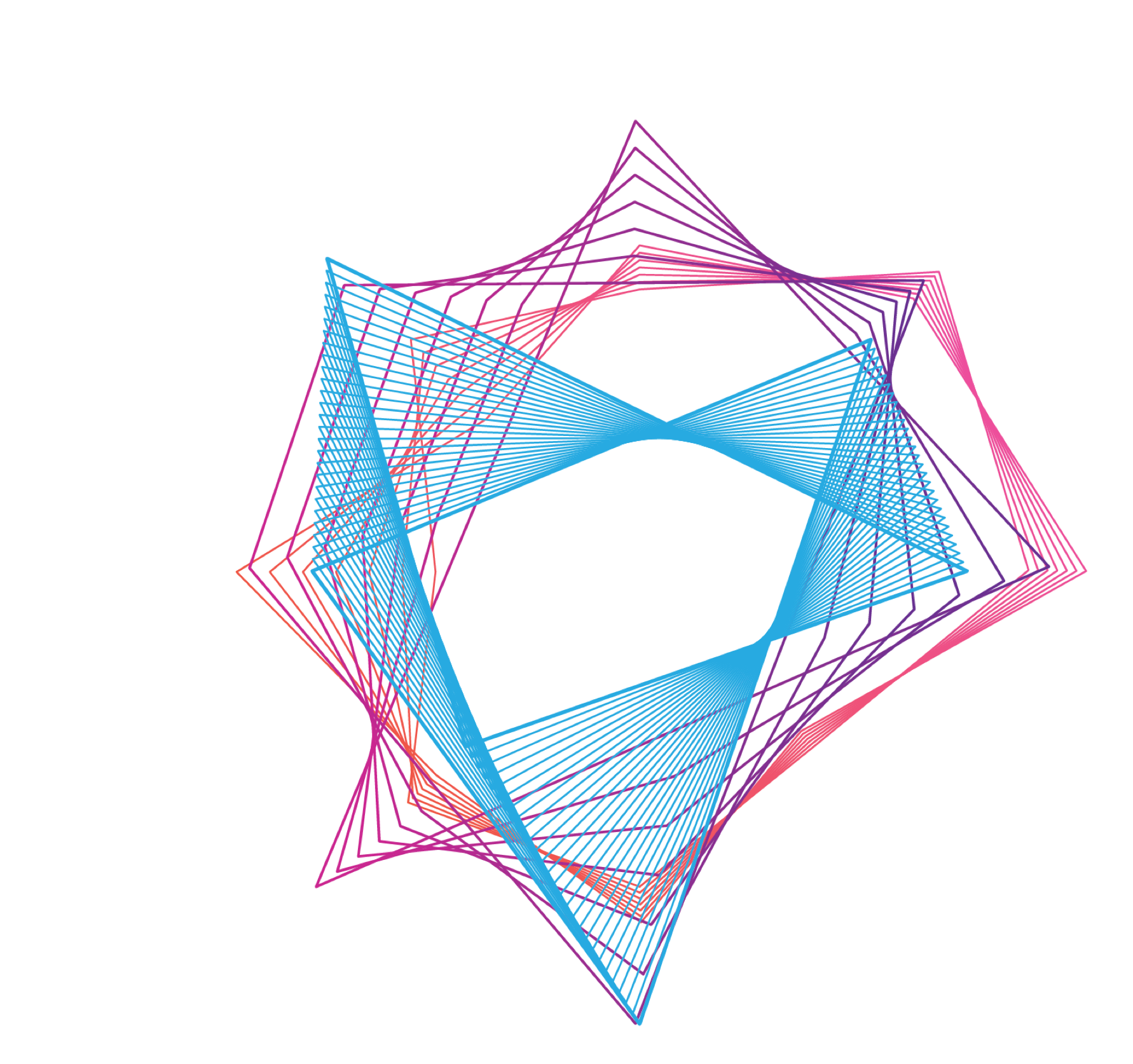 Our Airwire pitch was resoundingly approved by the Navy's PEAT Team led by Admiral Joyner in June 2018, and pushed for implementation to help combat the physiological episode crisis.

Admiral Joyner's team noted that our platform was one of the most inventive solutions they had encountered in all consultant investigations (by any party) done up to that point.